I’m always proud to tell people that I am the Musical Director of Carleton Ladies Choir, but never more so than after evenings like last night: the concert we put on at Carleton Village Hall was an enormous success.

Accompanied at the piano by Peter Gunn, the choir performed a really varied programme of songs.  These included Take These Wings by Don Besig, Rutter’s A Clare Benediction, the classic Beatles number If I Fell, and two medleys: one a selection of songs by Andrew Lloyd Webber, and a set of pieces from Mary Poppins. 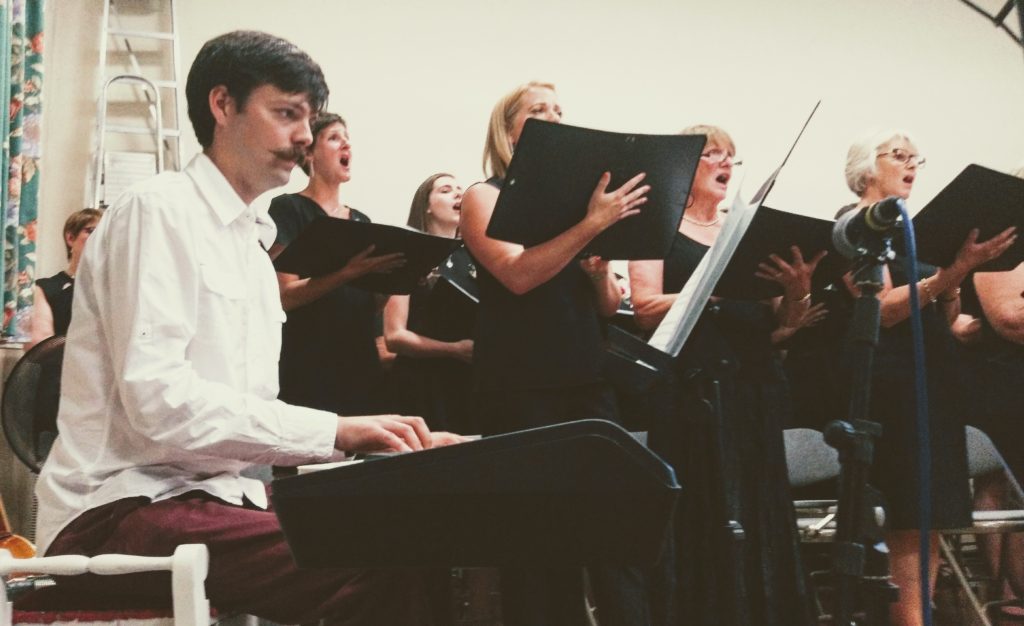 The programme for the evening featured not one choir, but two: led by Sarah Churcher, The Carleton Man’s Shed Choir made their debut.  And, after only eight weeks of rehearsals, they gave a wonderful rendition of rugby songs from around the British Isles. They were one of a series of performances given by choir members and their friends / family: poems were read, and solos, duets and group songs were sung… some with audience participation and others with Makaton signing.  A particularly enjoyable part of the evening for me was when I accompanied Cally Berry and Kate Lloyd for their rendition of I Know Him So Well: just before they began it was announced that the song would be dedicated to me, then as the song went on I realised that they had changed many of the lyrics to make reference to our choir rehearsals and my habits as a conductor – really very funny indeed.  Made it rather difficult to concentrate on the piano part, though!

And, the evening came to an intense climax with some of the most beautiful music that we have in our repertoire.  One of our final pieces was You Raise Me Up, and our performance of it was all the more moving because we couldn’t help thinking about a very recent loss to the village: the husband of one of our founding members.  Many of the choir members felt choked up during our rendition of this (not least myself) as we reflected on the sadness of losing someone dear.

After we’d sung, played, laughed and cried together, the audience called for an encore.  I couldn’t think of anything more fitting than the song Yorkshire, from Gary Barlow’s recent hit musical Calendar Girls:

One more year in Yorkshire: January, February, April and September and July.  Keep growing Yorkshire, where all the fields are green; the days don’t seem to change.  The seasons come and go and yet the days don’t change.